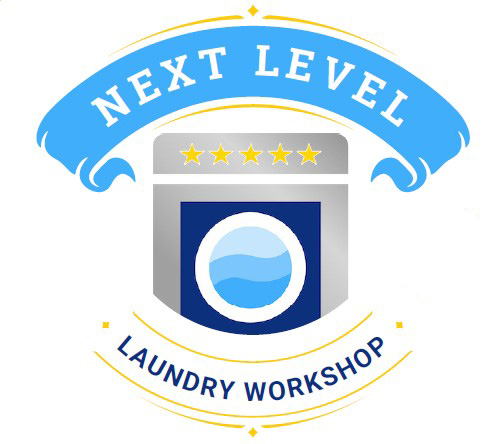 Come visit our salespeople and coin Electrolux sales rep, Chris Brick, at two workshops coming up in KC and STL next week. Not only will we be able to answer any questions you might have but we will also have the newest line of Electrolux to preview.

Sept. 14: Troy Willis and Chris will be at the Residence Inn by Marriott located at 11918 Westline Industrial Drive, St. Louis, MO 63146

Sept. 16: Drew Hoselton and Chris will then be at Hilton Garden Inn located at 5800 College Blvd, Overland Park, KS 66211 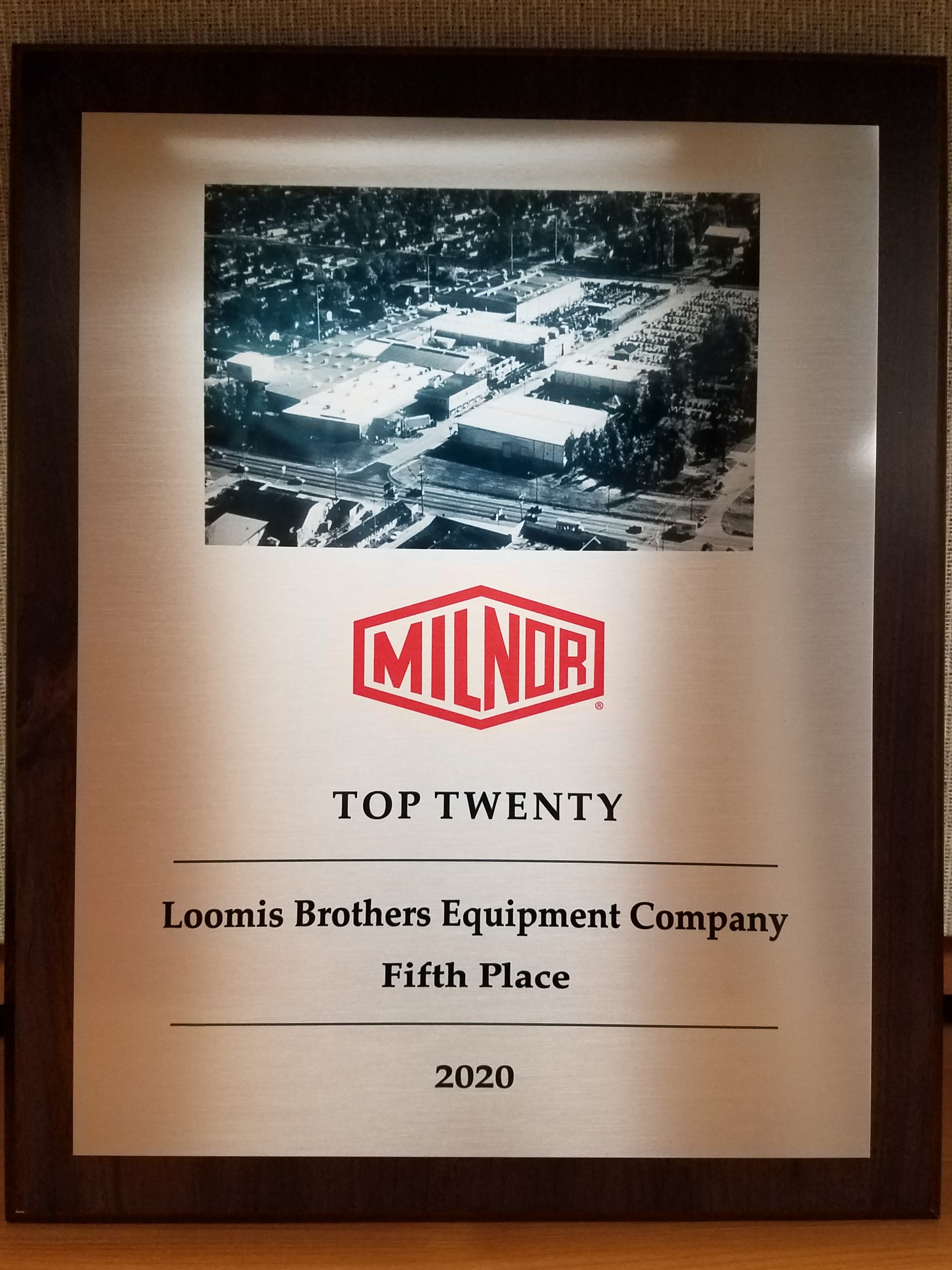 Pellerin Milnor Corporation announces its top dealers for machinery sales in 2020 in a recent news release.

Despite the many hardships faced over the last year, Milnor’s dealer network successfully rose to the challenge of safely providing sales and service support to their customers.

“The strength of our network of local dealers provided the reassuring availability of parts, service and machinery sales needed for the commercial laundry industry during the difficult times brought on by the Covid outbreak. PLMSCO’s achievement for the highest machinery sales in 2020 is well earned,” said Rick Kelly, vice president sales and marketing for Pellerin Milnor Corporation. “We are proud of PLMSCO’s outstanding results and we express our gratitude and appreciation for their strong customer-relationships in providing product solutions and support services of our industry-leading products.”

This partnership will expand on Loomis’ experience with serving vended laundries and OPL facilities, while providing Laundrylux with the opportunity to expand its presence in the region.

“Laundrylux is excited to begin our partnership with Loomis Brothers Equipment Company,” says Chris Brick, director of national sales development at Laundrylux. “Established in in 1949, Loomis Brothers is a third-generation, family-owned business that has built a tremendous reputation throughout the Midwest. We look forward to providing our support and seeing Loomis Brothers take its business to the next level.”

“Loomis Brothers and Laundrylux make a perfect partnership with our customer-first approach,” noted Matt Lamons, president of Loomis Brothers. “We’re excited to equip our customers with Electrolux Professional equipment for greater utility savings, faster throughput and higher revenue in their stores. I look forward to many years of working together to provide solutions and profit for the vended laundry market.”

According to Laundrylux, this new partnership will provide laundromat owners and OPL operators in the Midwest with Electrolux Professional laundry equipment, as well as access to Laundrylux’s broad range of services, such as financing, marketing, business development, real estate and construction. 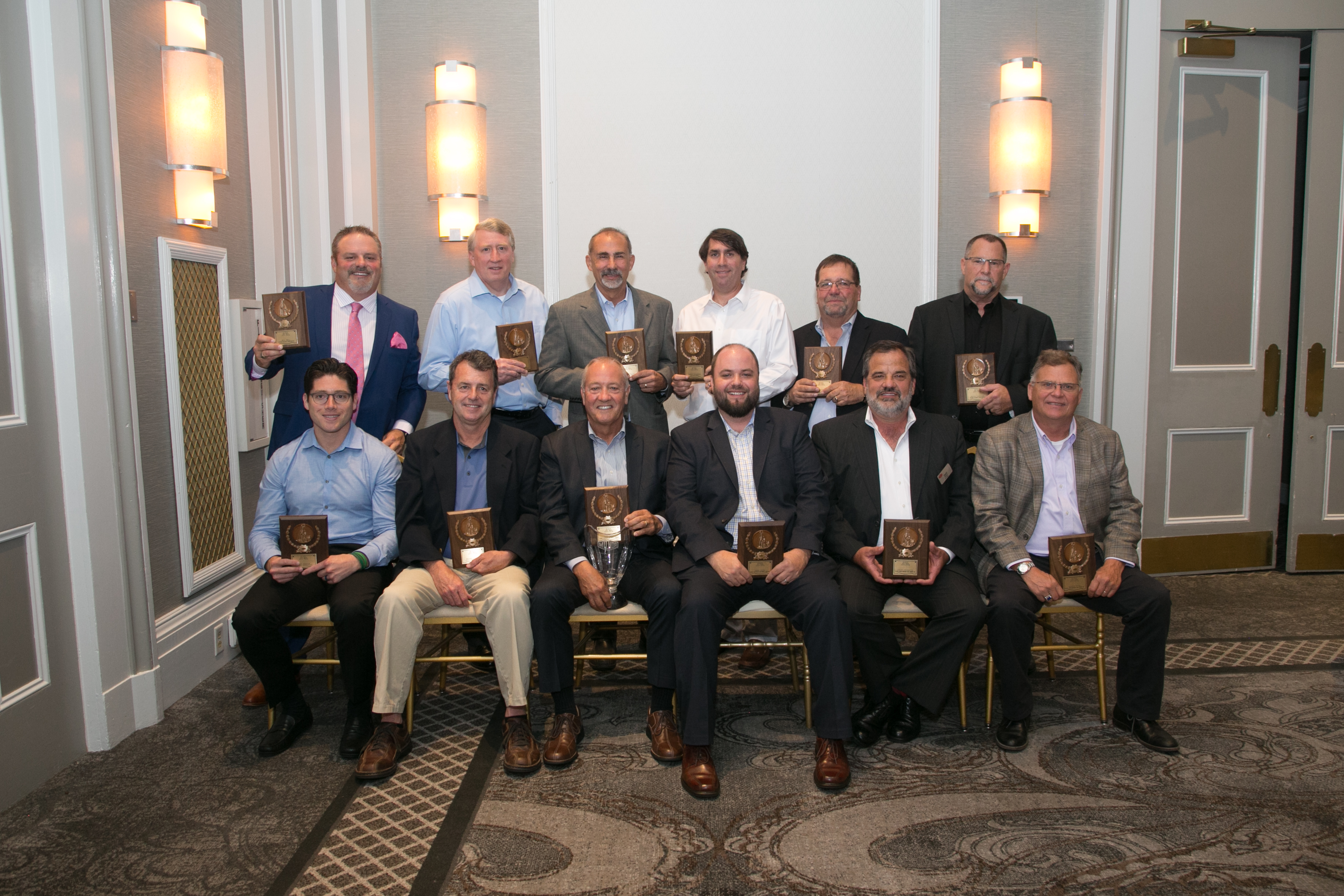 Clean Show 2019 ends on a high note as both Carl Rees and Gabe Rees are recognized as Key Man award winners for 2017-2018. This will mark the 11th time Carl has been presented with the Key Man award, an achievement Pellerin Milnor recognized by bestowing the “Lifetime Key Man Award” for the most number of times an individual has been awarded Key Man. Gabe follows suit with five Key Man awards now behind him.

While Carl adjusts to the life of retirement, we anticipate seeing more of Gabe’s achievements in the future! 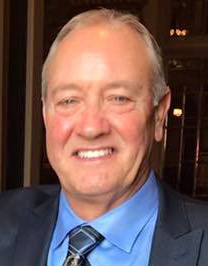 After a long career with Loomis Brothers, Carl Rees has decided to retire.  Carl’s retirement will be effective May 1, 2019.

Joining our company in 1980, Carl has worked with Loomis Brothers for 39 years; longer than any other employee in our company’s 70-year history.  Carl began his career installing machines and working with our service department.  A few years later he started working in our sales department where he was trained and mentored by his father, Jack.  This experience proved to be invaluable when Carl started working his own sales territory that included central and southern Illinois, southeastern Iowa, and western Kentucky.  After a long run as a territory sales rep Carl accepted promotions to several management positions:  sales manager, vice president of sales, and his current position as our vice president of strategic accounts.

Carl’s success throughout his career at Loomis Brothers has earned him a reputation as being one of the top dealer sales professionals in the Milnor/Chicago dealer network.  He is the recipient of numerous sales achievement awards from Pellerin Milnor, Chicago Dryer, and other leading manufacturers.  In particular, Carl has won Milnor’s coveted “Key Man” award for a record eleven times; a record that is likely to stand for a long time.

While we will all miss Carl and his industry experience, he has helped us prepare for our future by doing what his father did for him; training and mentoring his son, Gabe.  Loomis Brothers has now been the benefactor of working with three generations of the Rees family!  We pride ourselves on being a family-oriented company and we are fortunate to have a group of talented, long-term employees to lead us into the future.

Please join us in congratulating Carl on his well-earned retirement. 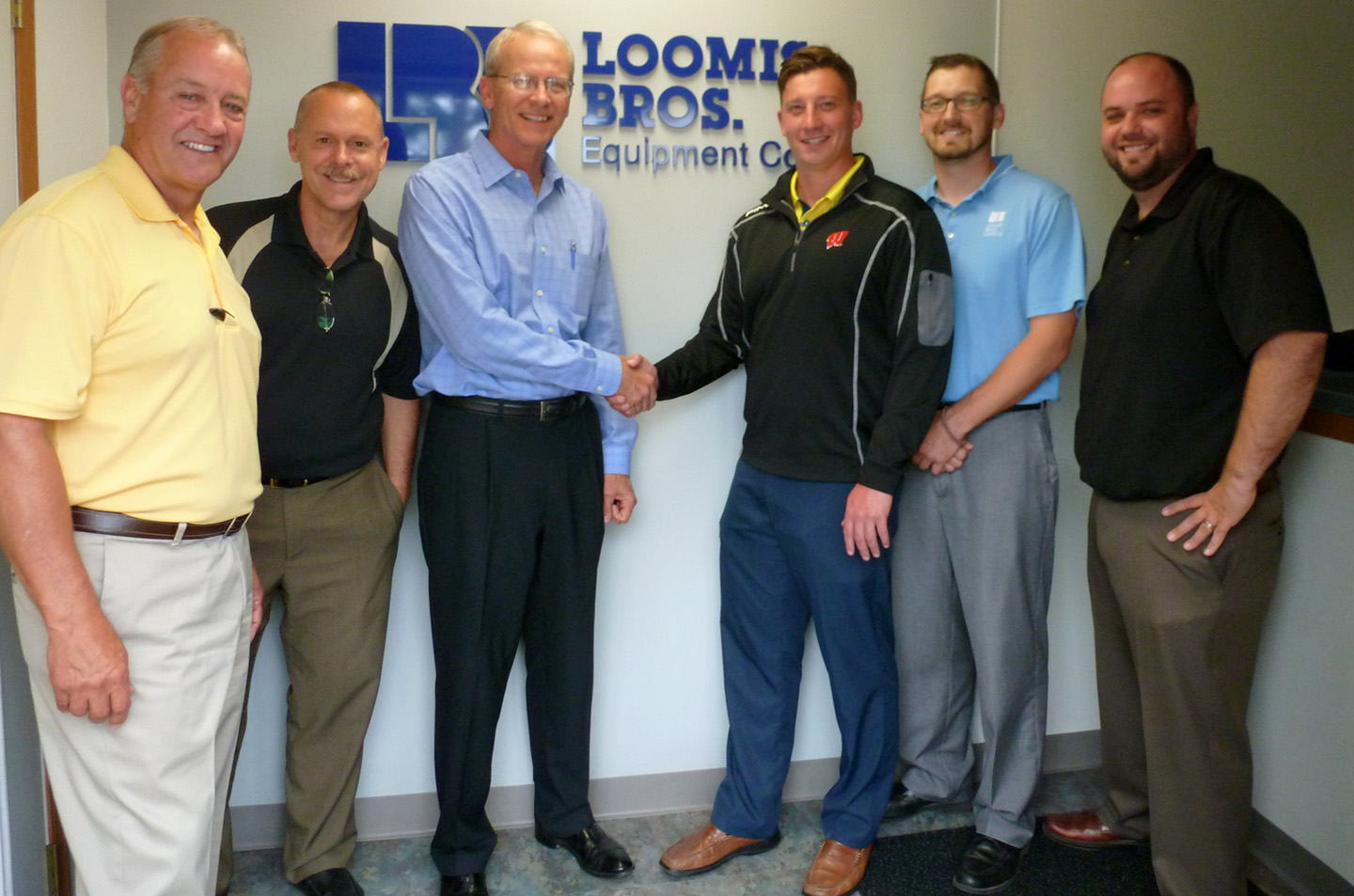 Huebsch® is proud to announce that they have added Loomis Bros. Equipment Co. to their distributor network.  Loomis Bros. is now an authorized distributor of Huebsch® vended laundry equipment in Eastern MO, Southern Illinois, and Northern Indiana.

Founded in 1949, Loomis Bros. has over 65 years of experience in the laundry business, and with Huebsch® having a more than 100 year history of manufacturing high quality laundry equipment it should make for a perfect partnership! 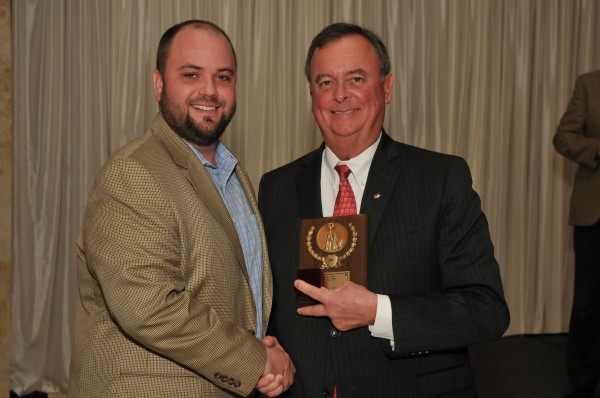 To sales awards were presented to Milnor dealers on Friday, April 17th by James W. Pellerin, President of Pellerin Milnor Corporation®, during Clean ’15 in Atlanta.  Our own Gabe Rees (left) won his third consecutive Key Man award for 2013/2014.  Here is a picture of Jim Pellerin (right) presenting Gabe with his award.  Congratulations Gabe! Loomis Bros. was also one of Milnor's® Top 20 dealers for 2014.

Our Team recently participated in the ALS Ice Bucket Challenge to raise awareness for Lou Gehrig's Disease and donate money for researching a cure. We've issued a challenge to our friends at Pellerin Milnor Corp, American Dryer Corp and Chicago Dryer Corp to participate as well. Good luck! 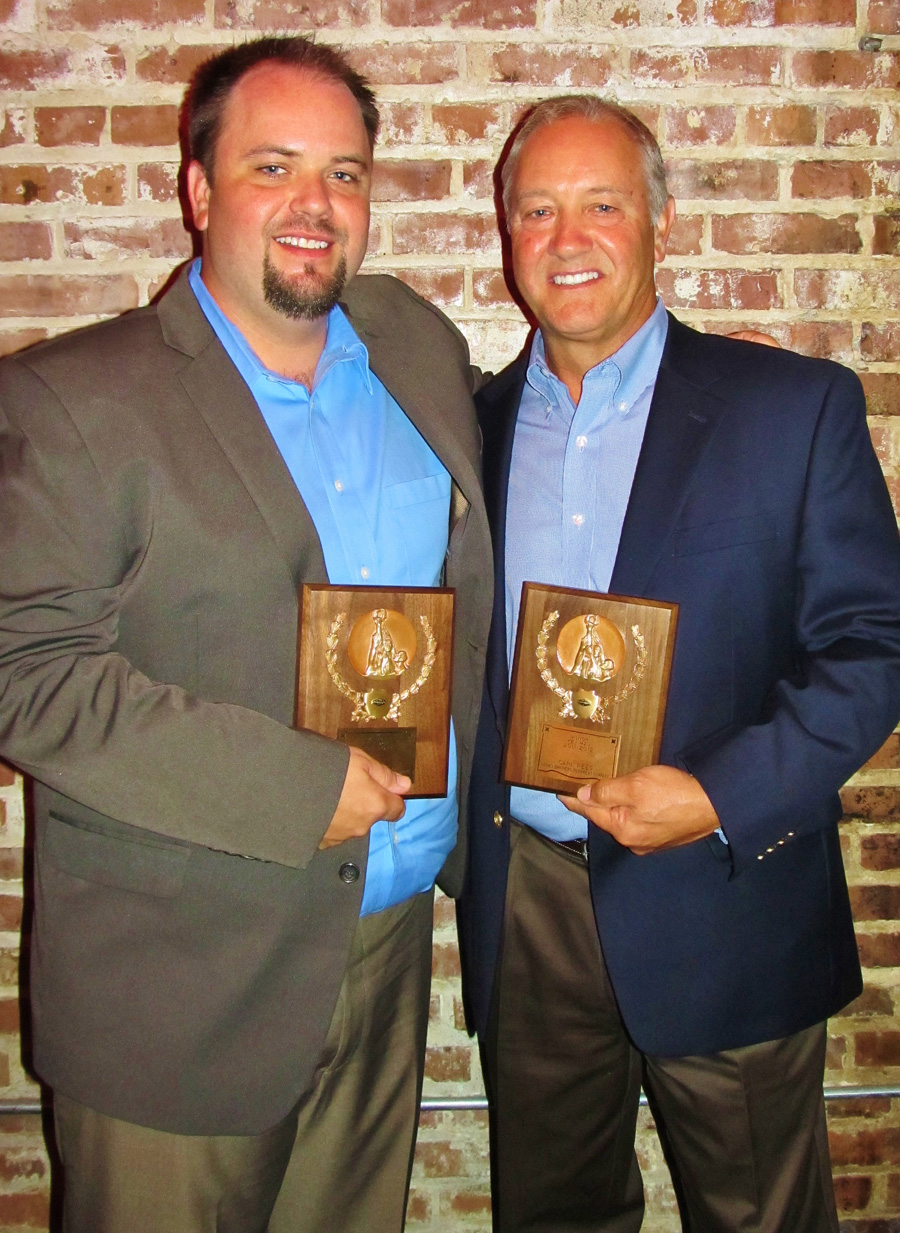 Carl Rees (right) and Gabe Rees (left) both won Milnor's® Key Man Award for sales in the Midwest region during 2011 & 2012. This was the first time that a Father & Son won the award together! Plus this was Carl's tenth time receiving the Key Man award and Gabe's second. Carl broke the record! Congratulations Carl & Gabe! 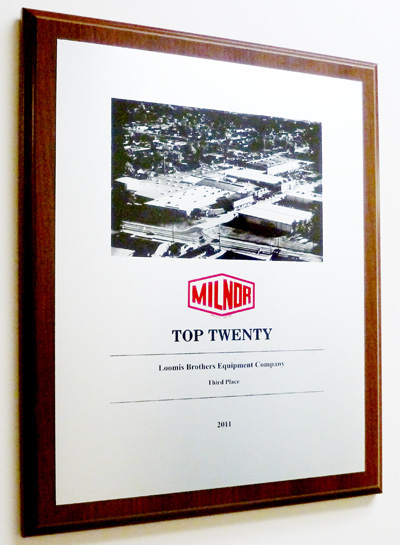 In 2011, we were awarded third place in total Milnor® equipment sales among all Milnor® dealers in the world. Each year Pellerin Milnor Corporation® recognizes their top performing dealers from around the world with their "Top Twenty" sales achievement award.

Loomis Bros. consistently ranks among the largest Milnor® dealers in the world and has been in the "Top Five" in seven of the last fourteen years. We have been an authorized Milnor® dealer since 1953.